First Spiritualist Church of Onset: ‘We’re still inspired’ after more than a century
by; Frank Mulligan

ONSET – Tucked away on the end of a quiet side street off Onset Avenue, the First Spiritualist Church of Onset has ministered to its congregation for well over a century.   The church building dates to 1903, said Pastor Kathleen Hoffman, an ordained minister and certified medium.   She added, “People still come by and say, ‘I didn’t know you were still here.’”

The church is year round, she said. In the beginning it was a summer camp, like the older, distinctive On-I-Set Wigwam Spiritualist Camp, 9 Crescent Place, which was built in 1894 and remains very much extant today, as well.

“This is our place where thousands and thousands of Spiritualists have walked,” she said during an interview at the church. Those visitors included the famous, like Emmet Fox, minister of New York's Divine Science Church, who drew thousands to hear him preach during the Depression.


Seeking solace and comfort for loved ones who have passed

The First Spiritualist Church of Onset’s mission has remained constant since its inception: to minister to “people seeking solace and comfort for their loved ones who have passed to the spirit side. And this is where they would get their insight and connection.”

The church at 17 Highland Ave. is a tangible link to the Onset past where Spiritualism took hold in the late 19th century and flourished for decades.

Michael J. Maddigan writes in “Spiritualist Onset, Talking with the Dead by the Sea:”
“In 1877 when Eastern Massachusetts Spiritualists came to Onset Bay Grove to commune with the spirits by the sea, they founded what would become one of the nation’s leading Spiritualist summer camp meetings. For the next 40 years, Onset attracted the most prominent speakers, lecturers, mediums and proponents of the Spiritualist world, who lent credibility to the movement in New England.

“At the same time the infrastructure of hotels, restaurants and recreational options needed to sustain these Spiritualists was established, laying the groundwork for the villages twentieth century expansion and resort development.”

Its draw, in fact, as a resort development supplanted what had been a Spiritualist mecca.

Maddigan stated, “Historically one of only a handful of Spiritualist communities in America, Onset rapidly emerged during the Victorian era as one of American’s leading Spiritualist centers – ‘the Spiritualists Summer Home by the Sea.’” From 1877-1900, Maddigan writes, Onset was visited by “the leading lecturers, mediums, mesmerists, psychometrists, clairvoyants, spirit photographers and magnetic healers of the day …”

Spiritualism began in upper state New York in the 1840s, Maddigan states, in part through the Fox sisters who claimed to have first contacted a spirit in 1848.
That bolstered the Spiritualist belief that existence continued after death, and that communication was possible through mediums. “Death was perceived as merely an event through which the spirit departed the physical body, thereafter eternally progressing towards perfection in the afterlife.”

By the mid-1860s there were a million Spiritualists in the United States, including Mary Todd Lincoln.
Maddigan added that many found comfort in Spiritualism in the wake of the horrendous casualties suffered during the Civil War.
Onset attracted people looking to prove Spiritualism to be fraudulent during its period of local primacy, but Maddigan maintains the village’s rise as secular resort area was most responsible for its local decline in numbers.

Hoffman said the Spiritualists who came together to form the church “used to meet in each other’s houses to do séances and religious services. They wanted to find out, is there an afterlife?”
A group of 21 people petitioned the state in October 1903 to form an incorporated church, which was granted in December of that year.
Continuity in church leadership over the years
There’s been great continuity in church leadership over the years.
Hoffman’s history with the First Spiritualist Church of Onset extends more than 30 years, including two decades as part of the pastorship.

The Revs. Gladys and Kenneth Custance, who preceded her, were the pastors for 50 years. They were also famous harpists who taught the instrument. “They were very renowned people, very educated and lovely souls.”

There were over 200 members when she first became associated with the church, she said. The church’s interior capacity is 80, but services have been held via Zoom of late due to COVID. She said Sunday church services in the building were averaging an attendance of about 35 people and up.

Classes for those wishing to learn about Spiritualism and its history are held Wednesdays. “It’s basically to help other souls empower themselves, to realize that they are not alone. To have guidance.”
There are certain ethics That education includes ethics.   “There’s a responsibility when you’re bringing somebody’s loved one in. There are certain ethics. There are a lot of mediums out there, but they’re not all trained. And so we train them on the ethics. The dos and don’ts.”

The church celebrates Thanksgiving and Christmas together through fellowships, “like most churches,” celebrations which have been curtailed recently because of COVID.

The membership is varied.

“There are some sweet people in the Wareham area who are isolated but we keep – they have a church. They have a family. It keeps them going.”

Hoffman added, “We also have young and old members. It’s a diverse community. And we still are getting new members, still getting new folks. We’re still inspired.”

And what does the future hold in store for the First Spiritualist Church of Onset? 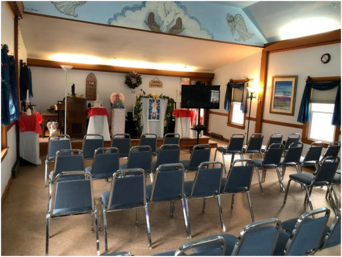 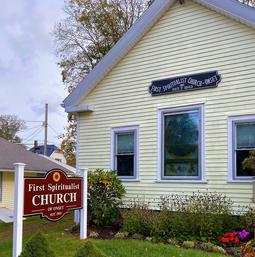 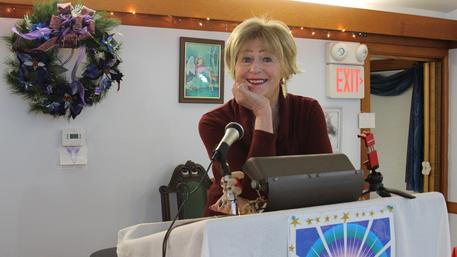 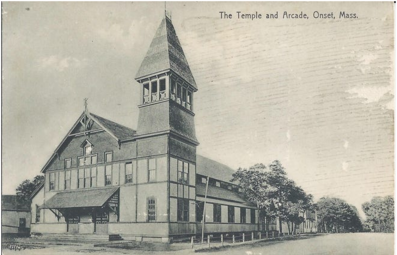 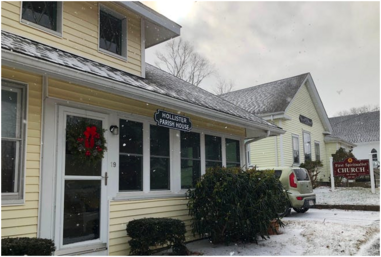 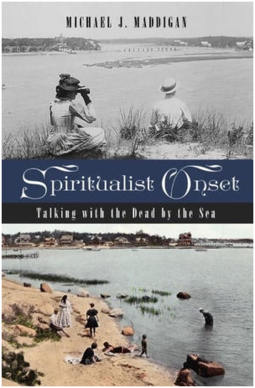 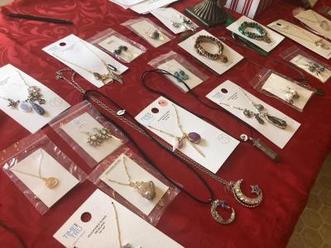 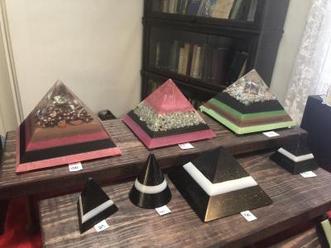 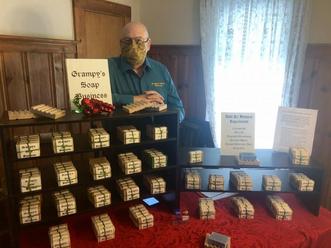 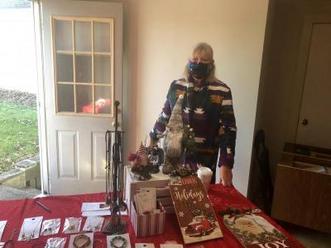 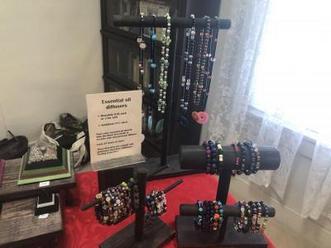 Vendors sold all-natural soaps, orgonite jewelry and other figurines, Christmas decorations and natural stone jewelry from socially distanced areas inside the Hollister Parish House. A variety of readings were also offered by appointment, including tarot card readings, psychic readings, sessions with mediums and more. The fair was scheduled from 10 a.m. to 4 p.m.

The church pastor Rev. Kathleen Hoffman said the organizers’ top priority was figuring out how to hold the fair safely.

“We saw today that we could actually pull it off,” she said, highlighting the covid safety measures which included having one-way traffic inside the church, limiting the number of people allowed inside, requiring masks at all times and frequent cleaning. “So we might even have another one.”

The church minimized the amount of advertising they did for the fair to keep the number of attendees small, Hoffman said. She said before the pandemic, the church would hold a large fair at the Wareham Elks Lodge that would have 300 to 400 attendees.

“People need that connection,” Hoffman said. “We’re at a very hard, difficult time and we need to give people hope and comfort by giving them some insight from their loved ones and maybe a little insight into their future if they’re doing another kind of reading.”

Mike Bassett, who runs Grampy’s Soap Business, was selling his homemade, all-natural soaps at the event. He said he has been selling soaps for about seven years.

“I bought a soap from another vendor, read a book that made no sense, I took a class and this is it,” he joked. “When I read the book … it had all these technical terms that made no sense. But the class put it all together for me.”

He said the church fair was his first fair of the year because of the coronavirus and added that he’d seen a few customers throughout the day.

Another vendor, Sharla Fenwick, was selling natural stone jewelry such as pendants and earrings from her business Earth Treasures.

“They say these stones have energy,” Fenwick said. “Each stone has different energy. People at psychic fairs are usually interested in the natural stones because they want to have that positive energy.”